John and I went to Teton and Yellowstone National Parks, and visited many of the popular sites: Old Faithful, the Grand Canyon of Yellowstone, and Jenny Lake. But the most memorable thing we did was an overnight backpacking trip in the Heart Lake Geyser Basin.

The first 4-5 miles was through a rather open forest, with lots of old, burned logs and short pine trees. Interpretive signs described this area as ravaged by the 1988 Yellowstone fire. I like mysterious old-growth pine forests, so while it was cool to see the forest regrowth, it still struck me as a little strange and sad. Sad, that the old forest was gone and would not regenerate in my lifetime, and strange that it was such an open, sunny landscape, often with grasses and wildflowers, and stunted-looking trees dispersed throughout. Groundcover included snarls of old, burned logs and other debris.

I later learned that the forest is dominated by Pinus contorta (lodgepole pine). The bedrock is rhyolite, one of the most quartz-rich and explosive of volcanic rocks. Rhyolite’s mineralogy is rather depleted and cannot support most arboreal species, but lodgepoles are drought-adapted, with shallow roots, and thus create large swaths of monotypic forest in parts of Yellowstone. Lodgepoles are also wildfire-dependent for their reproduction and for stand-thinning. This makes for large tracts of homogeneous forest that are comprised of a flammable tree species and accumulating ladder fuels. Wildfire, then, isn’t a matter of “if,” but “when.”

The 1988 Yellowstone Fire was significant, burning over 1.5 million acres, 800,000 of which were within Park bounds. During its early stages, modelers predicted what its extent would be in two weeks; the fire overtook that predicted area in just one day. At the time, it was believed that the soil and ground had been absolutely sterilized by this high-intensity burn. Seeing new sprouts and recruits the following spring was a surprise to Park staff and ecologists alike. The area has now been well-studied, and we understand much more about wildfire ecology in the West.

All this made for one of the strangest landscapes I have ever passed through, especially after a small pass about 4-5 mi into the hike. We had seen no geothermal activity until this point, and suddenly had an expansive view of several burbling, steaming geysers, and Heart Lake — our destination — in the distance. We descended from the pass:

We finally saw a small, quiet ranger’s cabin at the shore of Heart Lake. Something about walking on the gray beach of this lake gave me an intense feeling of remoteness. I felt like we had just landed on the surface of the moon, or washed ashore onto a deserted island. 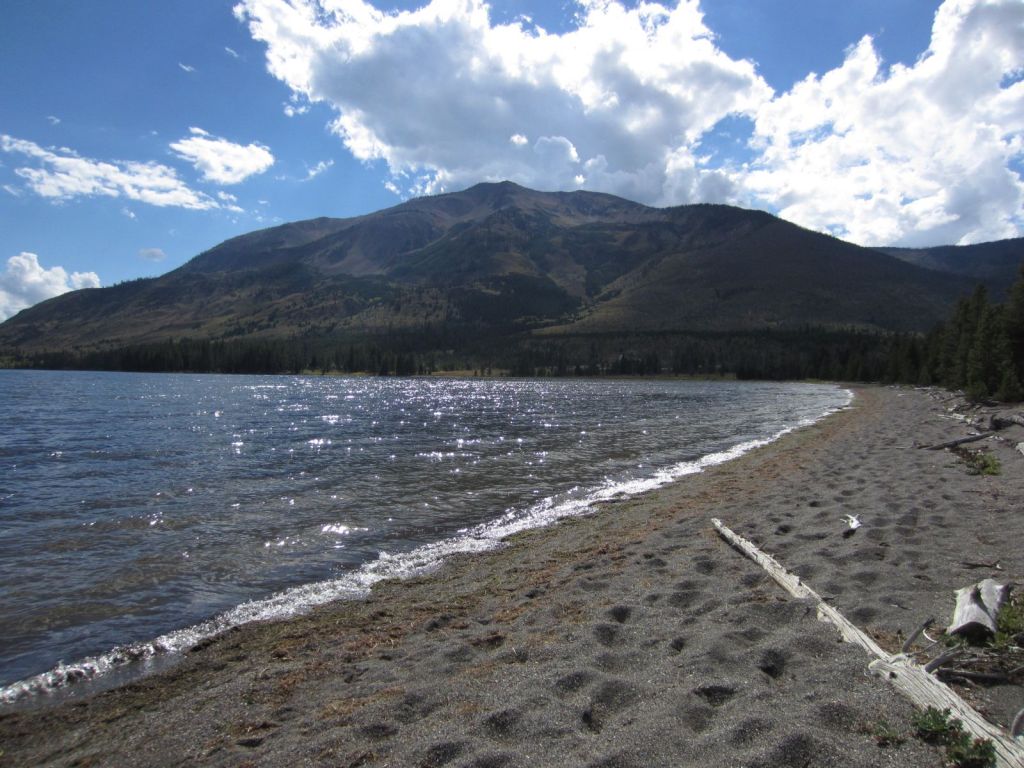 I misread our campsite number on the permit, and so we continued to hike farther and farther along Heart Lake’s perimeter. Eventually we left the shoreline, and ascended slightly about 100-200 feet above the lake’s edge. The terrain was irregular and undulating, with a steep descent to the water. Once-glaciated mountains were to the west, including Mount Sheridan. The steep drop and the hummocky surface signaled to me that we were crossing a series of old moraines. The glaciers are long since gone, and the surface of these features have stabilized (somewhat) and now host vegetation. It was some rather exciting geomorphology to me, even if it meant we were off-course and overshooting our eventual campsite. 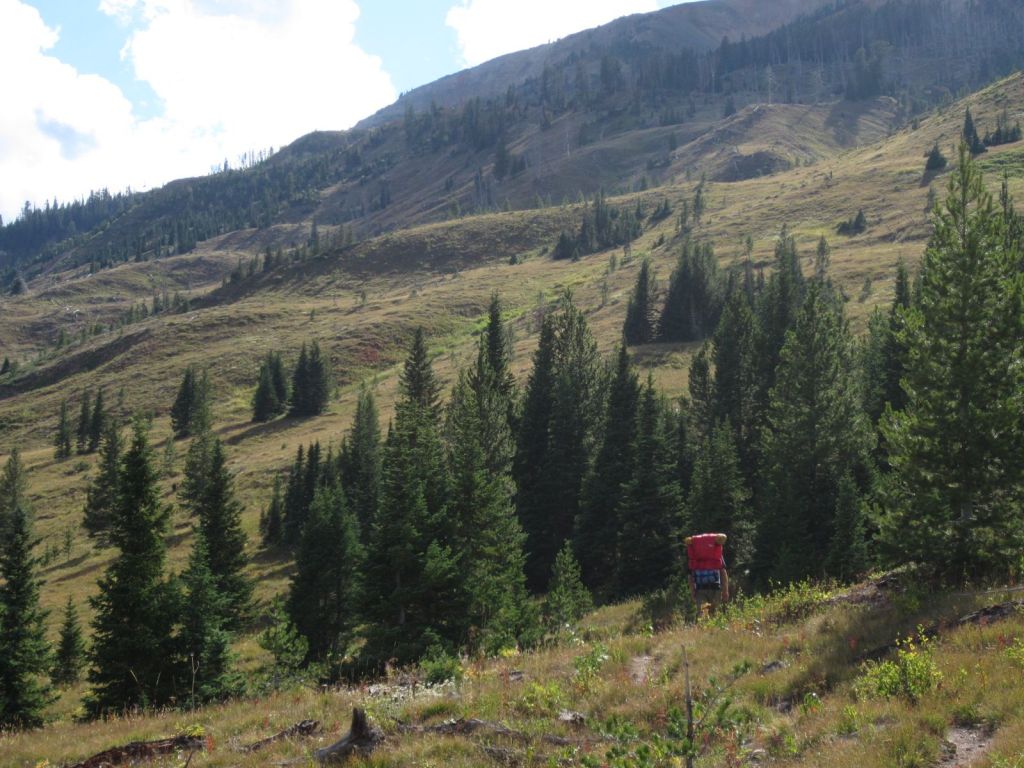 Ultimately, we backtracked to our rightful campsite, which was a good thing, because the backcountry rangers diligently come ‘round every evening and ask for permits. We were about 20 yards from the shore of Heart Lake. While wading in the lake and cleaning up from the day, I heard a splash and saw 5 small heads start moving in the water. They were river otters! They noticed and swam towards us, bobbing in the water and making (threatening?) calls at us, before they swam off. It was such a cool wildlife encounter as evening settled over the lake.

We awoke to fog the next day, and waited for the sun to emerge and dry our gear. We spoke to the ranger on our way out about where in the geothermal area we could swim, and he directed us to Witch Creek, about 2 miles back toward the pass. Park rules state you can only soak in water bodies that have a current. So we did this, and it was amazing to take off a heavy pack, and relax in a natural, flowing “spa.” Every backcountry trip should come equipped with a natural “spa,” to help work out all the tension in the back and neck!

One of the allures of backpacking for me is the experience of traversing a landscape, with time to observe the changes in vegetation, terrain, and geology. This was one of the most unique backpacking trips I’ve done. I enjoyed the shared experience with John, and had never seen so many earth processes at close range that all interplayed to create this landscape of geyser activity, wildfire scars, and glaciation.

Want to make this trip? See my next post on guides, maps, backcountry permits, and other resources.

One thought on “Heart Lake Backpacking”