My work has largely focused on how landscapes have responded to climate variability in the past, and how understanding this change can inform our expectations for landscape change on a warming planet. I’ve used physical, geochemical, and biological analysis of  lake sediment cores to address this question. Building a history of environmental change from a lake basin can show if the site was sensitive to local and global climate events.

Projects I’ve worked on in North America include: 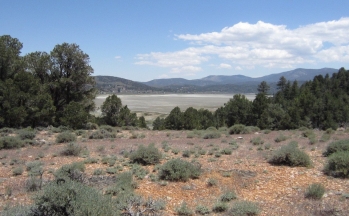 Overlooking the Baldwin Lake basin from an ice-age pebble plain, May 2014

Sediment, charcoal, and geochemical data at the NOAA National Centers for Environmental Information

The Grand Kankakee Marsh once covered 1000 mi2 of northwestern Indiana and was known as the “Everglades of the North” for its rich biodiversity. Late 19th century resource exploitation and drainage included channelizing the Kankakee River, irreversibly disturbing the Marsh. How has deposition and vegetation varied across the Kankakee Marsh over millennia in response to climate change? My approach to this question involved a field campaign to northwestern Indiana in June 2019 with students, funded by the National Geographic Society. Students developed capstone projects of their own, and in Spring 2020, an interactive map of land-use change and geography K-12 curriculum on our results will be developed.

This project has a separate page with research updates and outreach materials. Please visit!

I had my start in lake coring and analysis while pursuing my M.S. at the University of Cincinnati. Radiocarbon ages from a series of small-basin cores throughout Ohio and Indiana showed that landscape exposure (and therefore deglaciation) occurred within 2-3,000 years of the ice sheet’s maximum extent, earlier and faster than previously believed (Glover et al., 2011, Quaternary Research).

My animation of Ohio-Indiana deglaciation, visualizing retreat of the ice margin (based on Dyke, 2004) and exposure of these small basins: